Today, for the first time ever, we can reveal some of the innermost workings of TV Licensing's sinister and secretive television detector vans.

Capita Business Service's Chris Christophorou, acting on behalf of the BBC as Licensing Authority, applied to Canterbury Magistrates for a search warrant under Section 366(1) of the Communications Act 2003 on 28th June 2011. 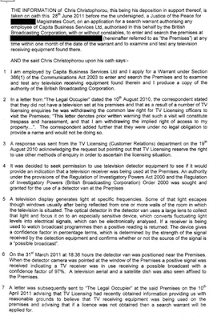 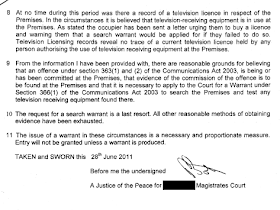 In order to obtain that warrant Christophorou had to provide evidence to a Magistrate, on oath, that an offence was suspected at their target address. In doing so he revealed that TV Licensing's detection capabilities rely, at least in part, on light emitted from television receiving equipment.

We consider the science behind the BBC's TV detection equipment to be very dubious indeed - a stance further reinforced by Christophorou's admissions below. We are exposing it for public scrutiny, because of the distinct possibility it has been given undue evidential weight when TV Licensing apply for search warrants. We feel even more of a duty to share this information in the week the transparency, accountability and lawfulness of the entire UK media has been brought into focus.

THE INFORMATION of Chris Christophorou, this being his deposition in support thereof, is taken on oath this 28th June 2011 before me the undersigned, a Justice of the Peace for Canterbury Magistrates Court, on an application for a search warrant authorising any employee of Capita Business Service Ltd, authorised on this behalf by the British Broadcasting Corporation, with or without constables, to enter the premises at [REDACTED](herein referred to as “the Premises”) at any time within one month of the date of the warrant and to examine and test any television receiving equipment found there.

AND the said Chris Christophorou upon his oath says:

1. I am employed by Capita Business Services Ltd and apply for a Warrant under Section 366(1) of the Communications Act 2003 to enter and search the Premises and to examine and test any television receiving equipment found therein and I produce a copy of the authority of the British Broadcasting Corporation.

2. In a letter from “The Legal Occupier” dated 10th August 2010 the correspondent stated that they did not have a television set at his Premises and that as a result of a number of TV Licensing enquiries he was withdrawing the common law right for TV Licensing officers to visit the Premises: “This letter denotes prior written warning that such a visit will constitute trespass and harassment, and that I am withdrawing the implied right of access to my property…”. The correspondent added further that they were under no legal obligation to add a name and would not be doing so.

3. A response was sent from the TV Licensing (Customer Relations) Department on the 19th August 2010 acknowledging the request but pointing out that TV Licensing reserve the right to use other methods of enquiry to ascertain the licensing situation.

4. It was decided to seek permission to use television detector equipment to see if it would provide an indication that a television receiver was being used at the Premises. An authority under the Regulation of Investigatory Powers Act 2000 and the Regulation of Investigatory Powers (British Broadcasting Corporation) Order 2000 (sic) was sought and granted for the use of a detector van at the Premises.

5. A television display generates light at specific frequencies. Some of that light escapes through windows usually after being reflected from one or more walls in the room in which the television is situated. The optical detector in the detector van uses a large lens to collect that light and focus it on to an especially sensitive device, which converts fluctuating light signals into electrical signals, which can be electronically analysed. If a receiver is being used to watch broadcast programmes then a positive reading is returned. The device gives a confidence factor in percentage terms, which is determined by the strength of the signal received by the detection equipment and confirms whether or not the source of the signal is a “possible broadcast”.

6. On the 31st March 2011 at 18.36 hours the detector van was positioned near the Premises. When the detector camera was pointed at the window of the Premises a positive signal was received indicating a TV receiver was in use receiving a possible broadcast with a confidence factor of 97%. A television aerial and satellite dish was also seen affixed to the Premises.

7. A letter was subsequently sent to “The Legal Occupier” at the said Premises on 10th April 2011 advising that TV Licensing had recently obtained information providing us with reasonable grounds to believe that TV receiving equipment was being used on the Premises and advising that if a licence was not obtained then a search warrant will be applied for.

9. From the information I have been provided with, there are reasonable grounds for believing that an offence under section 363(1) and (2) of the Communications Act 2003, is being or has been committed at the Premises, that evidence of the commission of the offence is to be found at the Premises and that it is necessary to apply to the Court for a Warrant under section 366(1) of the Communications Act 2003 to search the Premises and test any television receiving equipment found there.

10. The request for a search warrant is a last resort. All other reasonable methods of obtaining evidence have been exhausted.

11. The issue of a warrant in these circumstances is a necessary and proportionate measure. Entry will not be granted unless a warrant is produced.

Before me the undersigned

From the BBC's previous response to our FOIA requests we know all too well that TV Licensing employees are not adverse to criminal activities. Assuming Christophorou's evidence, particularly point 5 above, is an honest representation of how detector vans work then it's no wonder the BBC wants to keep their technology under wraps. In a nutshell they're employing bad science, possibly to baffle non-scientifically minded Magistrates into granting search warrants.

Are we meant to believe that their detection equipment can filter light from a TV set from all the other light sources in a property, despite it being reflected from several walls and refracted through several different media? It can do this when a lens is focused on a window, perhaps at an angle, perhaps with curtains and blinds fitted, perhaps with double glazing? 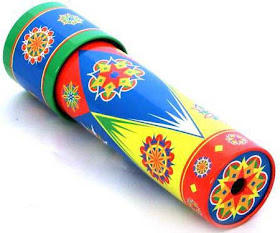 Please forward our article to as many engineers and physicists as you know, because I'm sure they'll say the same thing.

Edit (10/9/12): The occupier of the property searched by TV Licensing, a gentleman by the name of Steve Heather, has had his day in court. He was found not guilty of TV licence evasion, which casts into even sharper focus the evidence presented to obtain this search warrant.

Edit (9/6/13): We have added some further information to the foot of Steve Heather's victory post. BBC documents have been released that confirm the authenticity of the deposition statement published above. The documents also confirm that TV Licensing (or rather Capita) refused to allow Chris Christophorou, the goon who laid this "detection evidence" on oath, to appear for cross-examination at Steve's trial. Now why might that be?!
Share

Thank you for making a comment. We love to hear your opinion on what we write, be it positive or negative. Unfortunately, due to previous abuse of our comment system, it is necessary for us to approve each comment before it is published. We will only approve comments that are well composed. Please only enter your comment once and wait patiently while we approve it. Finally, apologies for Blogger's horrible Captcha!